In one day, Lakisha ‘Kisha’ Trimble will put 160 miles on her car to get from her home in Arkansas to her job as a supply technician at Red River Army Depot in Texas. She’s been making this drive for the last three years. Why? Because by far, this is the best paying job in this part of the country. In her own words, Kisha was ecstatic to get this job.

“I was able to provide more for my family, more than what I was doing. Before, it was kind of like paycheck to paycheck. Now, not so much,” said Trimble.

Kisha has three kids with a grandchild on the way from her oldest. She jokes that the two little ones, Orlandis who is 6 years old and Terry who is 3, are the recipients of most of her Union Wages. She’s provided a warm and happy home for her brood.

And although she is safe during this round of lay-offs at Red River, that could quickly change if this happens again in the future. With only three years seniority, she doubts she would make the next cut. It was bittersweet for Kisha to hear, just days ago, that she still had a job.

“It was kind of a relief, I can’t lie,” said Trimble, “a relief because I can continue to support my family.”

Harvey has been at the base for nearly 12 years so he’s seen the ups and down in the area. Right now, the government is laying off nearly 600 Union Members, both NFEE and IAM members, within the next month or so. Like Kisha, he’s thanking a higher power that he isn’t on the list. But as the local union president, his heart breaks each and every day when the members knock on the door of the local.

“With me being in the position I am, I have to listen to all the individual stories and yes, I take it heart,” said Harvey. “I don’t want to see nobody lose their jobs.”

That’s why he and Kisha are taking part in everything the Machinists Union is doing to prevent this from happening. Lobbying Congress, getting the message onto social media and into the local newspapers, visiting state lawmakers – whatever it takes to save these jobs and the ones that could be at stake in the future. 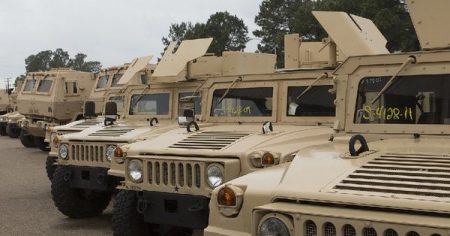 “We aren’t talking about 600 jobs here. We are talking about 600 families and multiple communities that will be ravaged if the U.S. Government goes through with these lay-offs at Red River Army Depot. That’s not acceptable when many of these hard-working men and women have given decades to a job that makes sure our U.S. Military has the tools it needs to succeed,” said IAM Southern Territory General Vice President Mark A. Blondin. “Why now isn’t the Government making sure these workers have what they need to succeed in life?”

Harvey agrees. “We need these jobs. We need this place to stay alive. We want our economy around here to grow. This right here, kills it. We need growth – we don’t need anything to die.”

Kisha is doing her part by handing out information at the Depot and making calls to her state lawmakers daily. Because she’s honest when she says, she has no back up plan if this happens again.

The post Nowhere Else to Go appeared first on IAMAW.