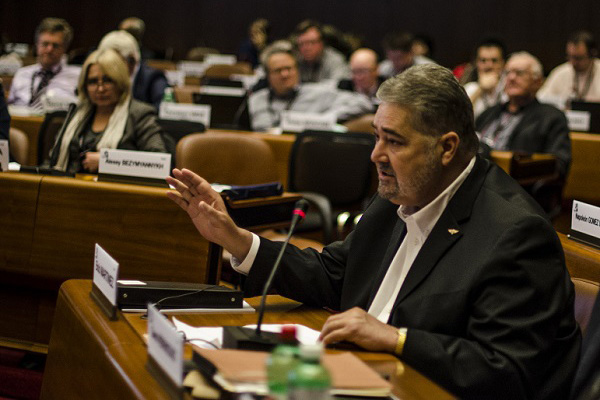 IAM International President Bob Martinez called for solidarity among industrial union leadership in a recent meeting with his peers on the IndustriALL Global Union Executive Committee in Geneva, Switzerland.

Martinez spoke against NAFTA and the current global trade policy that rewards corporate bad behavior at the expense of working people.

“Trade policy in North America is written by corporations and for corporations,” said Martinez. “Trade agreements have been used by company after company to flee union contracts in the U.S. and Canada to countries where basic human rights do not exist.”

He told his fellow executive committee members that companies like Boeing are moving work that belonged in North America to countries like China, where fundamental human rights do not exist.

Martinez called for IndustriALL to urge all nations to include International Labor Organization Conventions on the right to form a union and engage in collective bargaining in all future trade agreements. He also urged all unions to oppose the investor-to-state dispute mechanism that gives corporations the power to stop governments from regulating them.

“We believe in the global labor movement,” said Martinez. “We know that together, in unity and strength, we can build a better, fairer trade model based on justice, not corporate profit.”