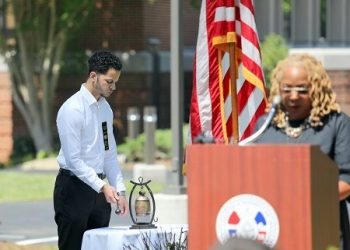 The IAM took pause last week to remember and honor the thousands of workers killed, injured or sickened on the job each year at a Workers’ Memorial Program at the William W. Winpisinger Education and Technology Center.

Unions across the U.S. and Canada recognize April 28 as Workers’ Memorial Day. It is a time to mourn the losses of our beloved coworkers, and recognize that there is much work to be done to ensure safe working conditions for all.

IAM General Secretary-Treasurer Dora Cervantes spoke about the importance of not only honoring the ones we have lost, but continuing to fight for safer work environments for all members.

“Each year we gather here to remember those who we have lost,” said Cervantes. “But make no mistake, our efforts to honor these dedicated workers does not end when we lay a brick with their name on it. Every single day IAM representatives fight to be sure our workplaces are as safe as possible.”

“We have to protect our Brothers and Sisters who are on the frontline making some of the most dangerous products in the world,” said Wallace. “So on this day, we will pledge to fight for safe jobs, economic security, opportunity and a better life for all.” 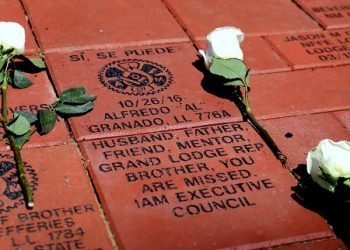 The Workers’ Memorial Program was held at the IAM Worker’s Memorial on the grounds of the Winpisinger Center, in Hollywood, MD which was dedicated in 2001 to recognize and remember the union members who are no longer with us.

The post Honor and Resolve on Workers’ Memorial Day appeared first on IAMAW.