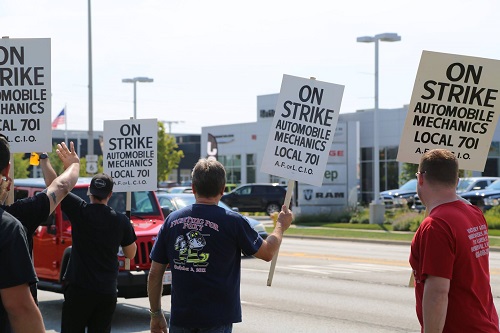 More than 1,700 IAM-represented auto mechanics from across the Chicagoland area are venturing into their third day on strike. A group of more than 130 Chicago dealerships have refused to pay the skilled workers a fair wage and provide them a fair work schedule.

See photos from the vote and picket lines here.

Negotiations have not resumed since the strike started, however the union negotiation committee is prepared to sit back down and talk.

“We were ready to go back to the table to resolve the issues on Monday, before the strike started” said Local 701 Directing Business Representative Sam Cicinelli. “My phone is on, but it has been silent from a call from the New Car Dealer Committee attorney David Radelet.”

The striking technicians have received an overwhelming amount of support from fellow IAM members, their community, politicians, customers and even dealership owners. Some dealership owners are even buying lunch and supplying water to the technicians who they describe as the “backbone of their dealerships.”

In the Chicago area? Come on out to any of our 130 dealership locations to show your support. Grab a strike sign. Or, call your local dealership and demand they give their auto mechanics a fair contract.

Not in the Chicago area? You can your support and solidarity on the IAMAW Automobile Mechanics Local 701 Facebook page.