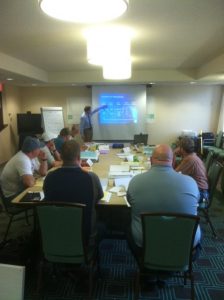 The agreement provides for raises of 3 percent the first year and 2.9 percent for the second and third years.

“One of the major issues in negotiations was the company’s insistence on implementing a 12-hour alternative shift plant-wide,” said IAM District 9 Business Representative Roy Collins. “The negotiating committee stood strong and was able to negotiate that any new 12-hour alternative shift only apply to future plant expansions. Current employees would then have the right to bid for these positions if they so desire, or the company must fill open spots with new hires.”

Other improvements were made to vacation, funeral leave, members’ rights to refuse mandatory overtime, and limitations on how long discipline remains in an employee’s file for progressive discipline.

“Congratulations to IAM Local 1345 members at Nestle Purina PetCare on the ratification of a new three-year contract,” said IAM District 9 Directing Business Representative Mark Conner. “Improvements in wages and better working conditions are the benefits of having a union.

“I would like to thank the IAM Local 1345 Negotiation Committee along with Business Representative Roy Collins for all of their hard work. I would also like to thank the William W. Winpisinger Center and staff from the IAM Midwest Territory and Headquarters for their help in helping the committee prepare for negotiations through the new IAM Negotiation Prep Field Training Program.”

“Congratulations to the members of IAM Local 1345, and congratulations to the entire Local 1345 Bargaining Committee on a job well done,” said IAM Midwest Territory General Vice President Philip J. Gruber, who noted that the right to collectively bargain is currently under attack in the state of Missouri, under the state’s recently-suspended “Right to Work” law. Union members forced the suspension of the law after delivering more than 300,000 signatures demanding it be put to a public vote next year. “This is what it means to be union – coming together and negotiating better wages and working conditions for you and your fellow co-workers. We must continue to fight to preserve this right for workers of today and tomorrow.”