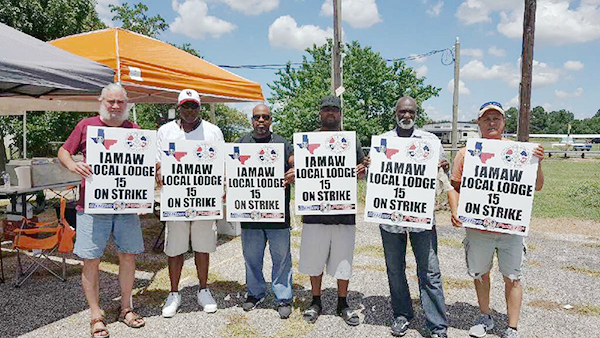 Deciding to strike is one of the most difficult decisions a person can make. With it comes one of the strongest messages you can send to an employer, but it also bears major consequences for union members and their families. It’s a very personal decision and one not to be taken lightly.

But for the 271 Machinists at Wyman-Gordon in Houston, the decision was easier than most. This time, it wasn’t just for them. This fight was for the next generation and the generation after that one.

“One of the gentleman on the strike line is Gregg Wiechkoske. He has more than 40 years at Wyman. He’s the second generation in his family to work here,” said Byron Williams, IAM District 37 Directing Business Representative. “For lack of better words, he just feels sorry that this contract is the best the company has to offer. Takeaways of benefits, unlivable wages, even trying to decrease overtime break, he calls it an outrage.”

“It is an outrage. Why Wyman-Gordon isn’t taking care of those workers who have spent the majority of their lives helping to build this company into a successful entity is unfathomable,” said IAM Southern Territory General Vice President Mark Blondin. “We’ve always been proud of the generational tie to this facility, and yet, in this last contract, that hope for the future has been wiped away with just a few pen strokes. Let’s look at what they are proposing for wages. According to their last, best and final, it would take a new hire starting at $12.75, close to 50 or 60 years to top out on wages. No one will be able to raise a family on that, much less save for retirement. It’s just unacceptable.”

And that’s the rallying cry for these members-that Wyman’s final offer was unacceptable. Unfortunately, many in this group of brothers and sisters have been in this spot before and have shared this fight for decades. To them, this fight is personal. Southern Territory Grand Lodge Representative James Parker noticed right away the solidarity among this group.

“These Machinists are very strong because they take these issues to heart. Cuts to short, and long-term disability insurance really struck a nerve because it touches all generations from retirees to new hires. They know each other and their families, so they know who would be adversely affected by cuts like this. It’s not some faceless person, it’s your brother and your sister that you see every day,” said Parker. “That strengthens their drive for a fair and equitable contract.” 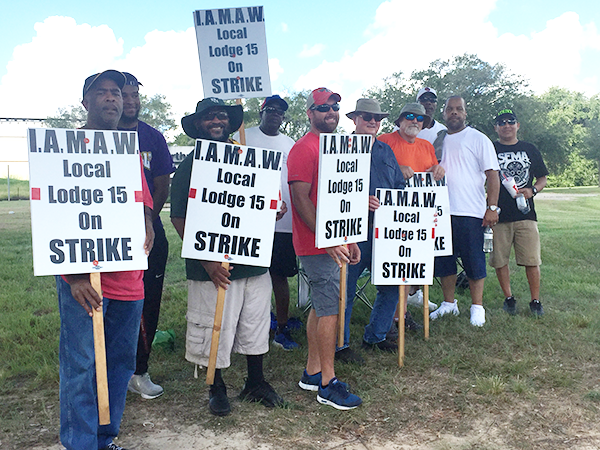 The same can be said for Wyman’s desire to cut overtime breaks to 15 minutes as a way to increase operating hours. This creates major safety issues, especially in Texas. In August, the facility can reach 120 degrees. Those breaks can mean the difference between life and death in extreme circumstances.

For Byron Williams, it’s these issues that have made this strike very bittersweet for him. Not only did he come out of this shop, but so does his father, who is now walking the picket line.

“It’s gut-wrenching to see what the company has put across the table because that’s what they think of my Dad and all the other men and women who have led me down the correct path throughout my years. I’ve followed in those footsteps and tried to bring great contracts to workers everywhere because of the lessons I have learned here. But I will say, to watch my brothers and sisters in Houston, my mentors, stand up for the betterment of others, as those before them did, that leaves me speechless,” said Williams. “Their fight is, and will always be, my fight.”

The post Houston Machinists Fight for the Next Generation appeared first on IAMAW.