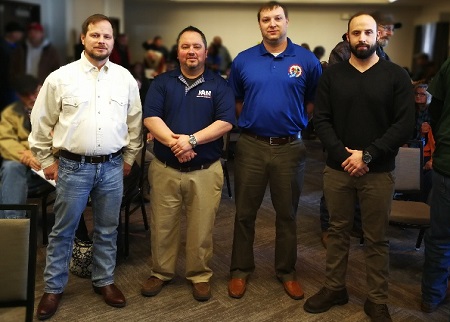 Three years ago, the situation felt almost hopeless. In one of the worst winters on record, members of IAM Local 219 at Bluegrass Station in Lexington, KY walked the picket line for nearly six months. This group of warehouse workers, who offer logistical support for our Armed Services, had their own fight to take on.

“I will never forget the day I joined the members on the strike line. With the wind chill, temperatures were dropping far into the negatives. It was the sort of cold that seeps into your muscles, trying to suffocate you by stealing your breath,” said Southern Territory General Vice President Mark A. Blondin. “But I watched as these workers stood together, taking Mother Nature and the contractor head on. And their message was clear – no matter what stood in their way, they were not backing down.”

Tony Blevins, Southern Territory Grand Lodge Representative at the time, watched as these workers literally changed the future for those who would come behind them.

“To say that I am proud of this group would be a huge understatement,” said Blevins. “With all the odds stacked against them, they prevailed. If anyone could write a book about ruthless contractors, it would be this group of fearless men and women.”

That solidarity set the foundation for the future of this group at Local 219. Fast-forward three years and their sacrifice is evident in each and every line of their new contract, which was overwhelmingly ratified by the membership this week.

“When I walked through the door into the hall after the members had voted Yes for this contract, the excitement was palpable. The members shook my hand, embraced me and it was so amazing to be part of that success,” said Bill Benson, Business Representative for IAM District 711. “This group has been kicked and downtrodden for awhile and it was so great to see them get something good. That was worth everything to me.”

A good contract is exactly what this group of close to 140 members received. Three years, with a 2 percent raise yearly that brought everyone up to, or in most cases above, area wage levels. Strong increases to their health insurance that equate to savings of thousands of dollars for many over the life of the contract. Fifty-six hours of paid personal leave and an improved 401(k). But the drum roll moment is that now these Machinists will reap the benefits of the IAM Pension Plan, something they never dreamed of just a few years ago.

“In this era of companies slashing or ridding workers of pension plans all together, to see a group who is able to move into the IAM Pension Plan for the first time is the reason we come to the table. It underlines the importance of having the Machinists in your corner,” said Blondin. “That pension plan means everything to workers, giving them the dignity and respect they deserve as they move closer to retirement. It’s what workers deserve after giving a lifetime of hard work and dedication to these companies. And in the Southern Territory, we will never leave a table without fighting until the bitter end for this benefit.”

You can hear it in his voice that Benson is very proud of what this contract will do for workers at Bluegrass Station. Not just union members, but for all workers in this area.

“This is a big win for workers in the Southern Territory because this contract lays a foundation and paves the way for everyone in this community. Workers who make sure our military Brother and Sisters have what they need to protect this country,” said Benson. “This agreement should be proof to many that a good union contract built on solidarity and determination to do what’s right, is not only achievable, but should be expected by all workers across the globe.”

Blevins couldn’t agree more or be happier for what this group has achieved,” said Blevins. “This group has yearned for the day to see a good contract. They have stood and fought the hard fight. I am so very proud to see what this great contract will do for them, their families and their communities.”

The post A Foundation of Solidarity appeared first on IAMAW.